Jim and Dougie have a tale to tell about their trip to The Whisky Shop in Edinburgh.

Once upon a time Jim opened his e-mail and was very excited to see an e-mail from Darren Leitch inviting us to a tasting in association with Douglas Laing.

As both Jim and Dougie have quite a few Old Malt Cask, Provenance and even four/five of The Old & Rare Platinum Selection bottlings we thought what a good early Christmas present. 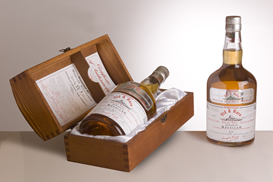 The first e-mail sent at 11.08 on Dec 11th inviting us to attend the tasting at Princes Mall Edinburgh between the hours of noon and 4 pm. on Saturday 13th Dec. But the unthinkable happened we got a second e-mail cancelling this tasting but the silver lining was that it was rescheduled for the same time same place on Saturday the 20th of Dec. Jim and Dougie still thought that Santa was coming.

(The reason for the cancellation was that Hugh Muir a director with Douglas Laing had taken ill).

The day arrived Jim and Dougie closely followed by our wives set of for the train to Edinburgh the Whisky Boys to enjoy some tastings and the girls to do some shopping and let us buy them lunch. The train journey albeit only half an hour we were all excited. (two sad little boys or what)?

On arrival in Edinburgh on the last Saturday before Christmas we could not fail to miss the buzz and excitement filling the air of our Capital. First port of call was to go to The Abbotsford Bar in the world famous Rose Street where we had our first refreshment a pint of real ale and a wee single malt dram. (there will be a full article on this bar soon)

So at approx. 1 pm we headed for the Princes Mall and The Whisky Shop, discussing en-route what we might be tasting and how busy it could be, our pace got faster the closer we got to our destination.

When we arrived at the Whisky Shop Jim and Dougie stood still and looked at one another, where was everyone, the shop only appeared to have shoppers in and there was no sign of any tasting as described in Darren’s a-mail. We approached a staff member and asked where the tasting was taking place, shock horror, we were told it was cancelled, but Jim and Dougie had checked their e-mails prior to leaving that morning and there was no sign of any e-mail cancelling the rearranged tasting.

The look of disappointment on Jim and Dougies faces (someone had just told them that Santa was not coming to their house, we cried like to little boys). But we found a savior in the name of Donald he took us aside and apologized, but then said he would give us a tasting session with some Douglas Laing bottlings. (Dougie is writing an article on the tastings we had, read all about them later)

Everything turned out well in the end, but it would have been very nice to have chatted and chewed the cud with other Whisky drinkers .

The Whisky Shop is a must visit if you want what all supermarkets and corner shops don’t have, choice. The range is large and exciting and it was very noticeable that this shop has decided to stock a very large range of Douglas Laing bottlings, and this can only vastly extend the range that the Whisky Shop has on offer. It may be close to the time that every town and city has a Whisky Shop on its high Street. Unlike all supermarkets the Whisky Shop will give you a taste.

Don’t just go to your local shop to buy your wee dram visit the Whisky Shop try different tastes and let some of their staff help you decide especially if you have a special event coming up, just go and visit them, and remember tell them The Whisky Boys sent you.