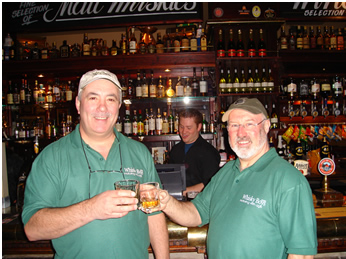 Jim, Dougie & Nicola together with the spare baggage (Jim and Dougies Wives) were heading for the SECC to attend the Whisky Live Exhibition (the wives going to the BBC GOOD FOOD exhibition) when Dougie said there is apparently a good Whisky pub in Queen Street, (but Dougie could not remember its name). It was close to the railway station we had all just arrived at.

So walking down Queen Street towards the River Clyde Jim noticed that on the left hand side of the street there was a lot of construction / alterations going on, with large amounts of scaffolding and tarpaulins covering the complete bottom half of the building. Jim said “I remember there was a pub there called The Ingram” Dougie then shouted “that’s the name of the one I was trying to remember”.

So we crossed the street and sure enough the pub was open, without further adieu , we all entered.

It was a pleasant surprise, it’s very traditional with plenty of old wood, big full bar and period pieces of furniture and prints adorning the walls.

A big plus for Nicola was that the bar actually had high stools around the bar which she believes (and I tend to agree) gives the bar a welcoming and traditional feel.

Lets get down to the nitty gritty, how good was the Whisky selection and the service of the staff on duty.

Well there was no problem there.

The Whisky gantry was heaving and very varied, any Whisky lover (malt or blended) would be able to find an excellent dram or two.

This pub being a Belhaven managed did not disappoint us with the selection of real ales on offer, you had the Belhaven Best together with three other guest ales. (Plus some lagers for those who still need a little education on real ale).

Well no surprise the wives both had coffee (nice hot and readily available at the bar).  The three drinkers had a mixed bag of drinks:

Jim:- half pint of Isle of Skye Red Cuillin and a measure of Lagavulin 16 year old (an Islay Malt for Jim, that’s a surprise!!)

Dougie:- half pint of Belhaven Best plus a measure of Scapa from Orkney.

Nicola:- had a half pint of IPA and a measure of Auchentoshan 12 year old.

As we half expected neither the ales or the malts disappointed.

The barman was very helpful and welcoming, and to top it off he gave us each a Pubcard for discounts in his or other Belhaven managed ale houses.  Absolutely no complaints about the staff, some other pubs could learn a thing or two from here.

Next time we are in Glasgow (Christmas shopping is coming up) we have every intention of visiting again. It is a pub of good traditional quality with attentive staff and a selection of Whiskies and ales that the Whisky Boys don’t find disappointing in any way, well done.

Thanks for the hospitality, see you soon…