Ho Ho Ho and a tale of Castlecary

Ho Ho Ho and a tale of Castlecary.

Well how did we get to the end of October so quickly ? It is really scary how time is flying past at a rate of knots. Like most folks we have the impending tsunami that is Christmas about to wash over us. The shops have already started to assault us with “jingle bells” and “We wish you a Merry Christmas” which through years of brain washing induces a catatonic trance where we all go into “Christmas Siege Mentality” and stock pile as much food, booze, wrapping paper etc etc etc. I have truly developed an involuntary reaction where I cannot walk past a bag of Satsuma’s without dropping them in my shopping trolley. Not satisfied with running around Tesco in my lunch hour, Jim has now suggested that we take an evening trip to an EVAN BIGGER TESCO, so we have even a greater opportunity to stockpile.

Sad as we are, we have a tradition that after a shopping fix we stop off at the Castlecary Hotel for one drink prior to 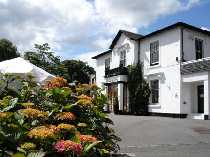 heading home. We are very fond of this hotel as it serves excellent quality bar food, has a vast gantry, and also sells real ales.

Castlecary is small village on the border between North Lanarkshire and Falkirk and is close to Cumbernauld. It is well known, like many small villages around this area for its association with the Roman Antonine Wall. A Roman camp existed at Castlecary, first constructed around the year 80 AD, possibly during the fourth campaign season of governor Gnaeus Julius Agricola.

The village sits to the west of the A80 (very busy road) and south of the Forth & Clyde Canal. Castlecary also lends its name to a viaduct which crosses the A80. These are commonly known as the “Castlecary Arches”.

Believe it or not, but there is actually a Castlecary, which as far as I know is a private house now. When I first moved out to central Scotland (20 years ago) there were renovations being carried out and at that time (and even now) I would love to have had peak at what it looks like inside, but alas I could only glance over the stone wall. The Castle isn’t very large, but from the “wall” it looks very old.

It is reputed that in 1561 Queen Mary visited Cumbernauld Castle. Tragically, the great hall collapsed during the visit. Mary spent much time in Cumbernauld village comforting relatives of those servants killed in the accident. She also visited Castle Cary, where one of her other “Maries”, Mary Livingston, was staying. The two young women planted a pair of yew trees which still grow in the castle garden.

So now that I have shared with you Jim & I’s ritual and also given you a little history about the area. If ever you are in this local, you should certainly check out the Castlecary Hotel – one of our favourites.

Jacqueline ( the wife of a Whisky Boy)