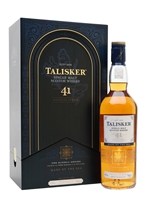 A 41-year-old single malt from Talisker's Bodega series, this is the oldest whisky ever released from the Isle of Skye. It has been finished in Manzanilla sherry casks from Delgado Zuleta, creating a rich, fruity character alongside the distillery's signature coastal flavours. Salty, spicy aromas of apple crumble, salted caramel, dried fruits and salty smoke fill the nose. Initially the palate offers notes of pepper, wood smoke, fudge, raisins and smouldering driftwood, before developing chilli, peat smoke and caramel that linger in the finish.