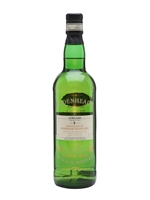 A 1989 vintage whisky from closed Lowlander Rosebank, gone since 1993 and now a number of attractive apartments. This was matured for nine years before bottling in July 1998 by Cadenhead's.
Please note that this is an old bottle and the closure may have deteriorated; care should be taken when opening the bottle. As such, the item is sold as described.