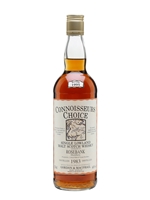 A 1983 vintage Rosebank released by independent bottler Gordon & MacPhail as part of the Connoisseurs Choice series. Rosebank, always richer than the other classic Lowland malts, closed in 1995 and bottlings are highly sought after.

Please note this bottle has picked up a natural sediment over time.
Please note that this is an old bottle and the closure may have deteriorated; care should be taken when opening the bottle. As such, the item is sold as described.