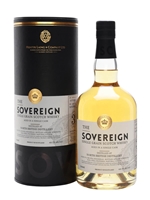 A 1988 North British single grain whisky from independent bottler Hunter Laing that was matured in a refill hogshead for 33 years, before being bottled in November 2021 as part of its Sovereign series. Aromas of strawberries, raspberries and blackcurrants fill the nose, complemented by notes of banana, pineapple and oily black pepper throughout the palate.