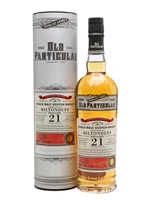 A 1995 vintage Miltonduff from independent bottler Douglas Laing as part of the Old Particular series. Distilled in February, it was aged in a refill bourbon barrel for 21 years before 244 bottles were yielded in November 2016. Complex and sweet with notes of honeycomb, sugar and bourbon.