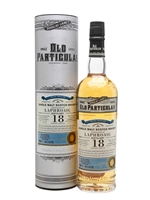 This 1998 Laphroaig has been released by Douglas Laing as part of the Old Particular series. Distilled in November and aged in a refill hogshead for 18 years, this is rich and oily with notes of salted caramel and charred meat.