“The Madeira casks that we’ve chosen to form the heart of the whisky relate back to the genuine traditions of Glen Moray experimenting with different, innovative techniques in maturation,” said Coull in a prepared statement.“ It’s me putting a twist on the spirit that was made by previous generations of master distillers.

“I wanted to bring in something from 1978, some of the oldest whisky in the warehouses, that represented whisky made by Robert Brown, the 3rd generation of Master Distiller, who was at the helm of Glen Moray from 1959 until 1987 as well as casks filled in the 80’s and 90’s by my predecessor, Ed Dodson. We’ve intertwined these with whisky that has spent its full term in first-fill sherry casks and also a proportion that has been finished in port, to develop the layers of complexity in the overall bottling. The port finished whisky brings a little lightness, which we felt perfectly balances the more robust flavours of the sherry and madeira casks in the blend.”

The Whisky Boys who have championed Glen Moray expressions for many a year were pleased to be one of the first to sample this new dram. 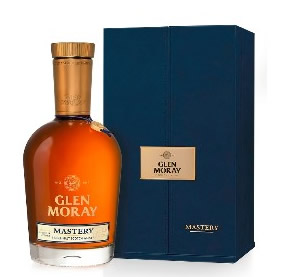 Taste…Rich dark chocolate moves in first, followed by a raspberry liqueur, sugar at the bottom of your espresso cup, raisin poppets, very complex and a wee bit naughty.

Finish…Long and wonderful, lingering at the back is some hidden wood and spice, sip gently and savour long.

Now that’s a dram. Well done to Graham and his team at Glen Moray this one is quite a triumph.

Only 1000 bottles will be released in individually numbered decanters presented in a leather box. The RRP being £800.00.

If there is anyone out there who have not experienced the joys of Glen Moray (I must say that this statement is hard to believe) then they have a wonderful range of expressions starting from as little as £25.00, my two favourites are the Port Cask and the Classic Peated.

From the Whisky Boys we wish you all the best on your 120th Anniversary and cheers for the next 120.