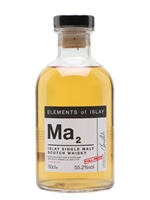 A peaty offering from an Islay distillery best known for its aromatic, approachable single malts. Aged in first-full bourbon since 2004, this dram adds an extra layer of intensity to the distillery's normal notes of vanilla, sweet fruits and light smoke.