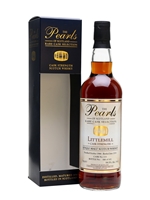 An indie release of whisky produced at Littlemill, closed since the mid-1990s and since destroyed by fire. It was distilled in October 1988 and bottled in June 2016 at 27 years of age. Dark in colour, we presume aged in a sherry cask, this is big and rich.