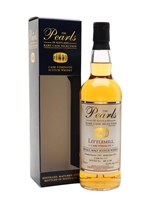 A 1991 vintage Littlemill from independent bottler Gordon & Company as part of the Pearls of Scotland range. It was distilled in January and bottled in June 2016 at 25 years of age.