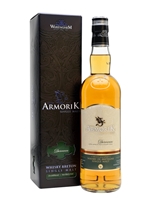 Dervenn translates from Breton as 'oak', denoting this release of Armorik from Warenghem has been matured in virgin Breton-oak barrels. This is an intensely sweet and spicy whisky with notes of nutmeg and cinnamon.