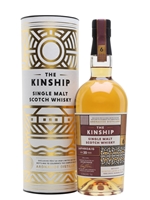 This limited-edition release of 1998 Laphroaig from The Kinship series was bottled by Hunter Laing for the 2018 Feis Ile to celebrate the completion of Ardnahoe distillery. Aged in two refill hogsheads and bottled at cask strength, this single malt has tobacco, citrus and peat smoke aromas. The palate opens with rolls of peat and liquorice, before developing into softer notes of pine needles, tobacco, sweet vanilla and lemon.