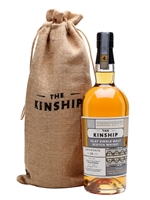 Previously only available at the Ardnahoe shop on Islay, this 30-year-old Laphroaig was specially selected by Jim McEwan, who is overseeing the build of the new Ardnahoe distillery. Aside from being incredibly rare, this whisky has notes of tar, smoke, ripe fruit and that classic medicinal, menthol aroma – incredibly characterful.