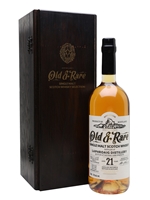 Not just content with bringing you lovely single malts as part of their Old and Rare range, Hunter Laing have decided to make Laphroaig fans even happier by bottling some of the distillery's 1996 whisky into magnums. That's one and a half litres of medicinal peaty goodness.