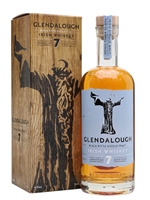 Glendalough have very deliberately chosen a period of seven years to age this whisky: seven is not only the number of year that St Kevin spent in the wild, but also a nod to the 'City of Seven Churches' he built at Glendalough. The whiskey inside the bottle graced by St Kevin's image is a floral, fruity whiskey with cinnamon and white pepper highlights.