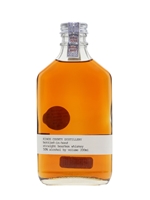 Four-year-old bourbon distilled, aged and bottled entirely at the Kings County distillery in New York. Notes of butterscotch, cinnamon, nutmeg and vanilla. Drink on its own or in a Manhattan (no pun intended).