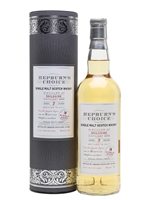 This 7-year-old single malt from Dailuaine was finished in a rum cask before being bottled in 2017. Notes of young lime, caramel, vanilla and spiced dried fruit. This is part of the Hepburn's Choice series and there are 138 bottles available.