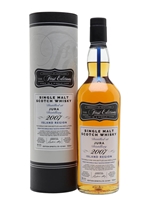 A 2007 Isle of Jura single malt from indie bottler Hunter Laing, matured in a single sherry butt for 14 years before being bottled in 2021 as part of its First Editions series. Aromas of crème brulee, vanilla custard and gingerbread fill the nose, complemented by notes of fudge, vanilla shortbread, buttery pastry and toffee apples throughout the palate.