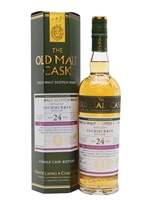 A 1996 Inchmurrin single malt from indie bottler Hunter Laing, matured in a single refill hogshead for 24 years, before being bottled in May 2021 as part of its Old Malt Cask series. Aromas of liquorice, tangy cranberries and peanut butter fill the nose, complemented by notes of raspberry, redcurrant, shortbread and chocolate chip cookies throughout the palate.