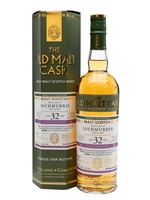 A very rare example of 1980s' Inchmurrin. Distilled in June 1984, the same year the distillery was mothballed for three years, this fruity whisky has notes of strawberry jam and apple pie.