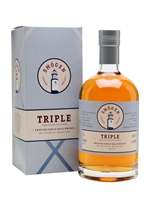 This release from Smögen of Sweden was triple-distilled in March 2011 using heavily peated malt. It was aged in a pair of 228-litre Sauternes casks for more than five years before being bottled in January 2017. A rich, smoky and fruity whisky with notes of apples, chocolate and vanilla.