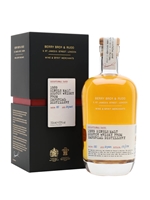 A 1989 Imperial single malt from indie bottler Berry Bros & Rudd, matured in a single cask for three decades before being bottled. Aromas of honey, lemon, vanilla custard, orange and apple juice fill the nose, complemented by notes of green apples, gooseberries and soft wood smoke on the palate.