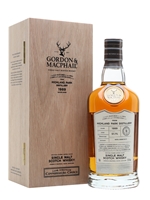 This 30-year-old Highland Park single malt was distilled in March 1989 and spent the next three decades in a single refill sherry butt, before being bottled in March 2019 for Gordon & MacPhail's Connoisseur's Choice series. The nose is rich and fruity, stewed fruit aromas are joined by roasted coffee beans, cocoa powder, cinnamon and citrus. The palate offers notes of juicy oranges, black pepper, chocolate praline and red apple, before a spicy finish that lingers in the mouth.