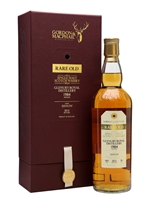 A 1984 vintage Glenury Royal released as part of Gordon & Macphail's Rare Old collection of hard to find single malts. Fortunately G&M have well stocked warehouses and they managed to pick up a few casks of whisky from this lost distillery before it was mothballed in 1985. It has since been turned into apartments.