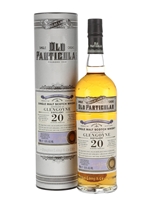 Independent bottlings of Glengoyne are incredibly rare. This one was distilled in April 1996 and aged for 20 years in a refill hogshead. The result is a rich and layered whisky with notes of lemon, zest, sweet orange and lingering spice.