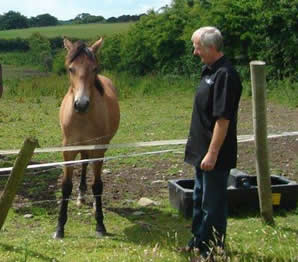 Whisky Boy
Just to keep you informed. You are probably aware that we had a recent visit to Ireland and, of course, we had to see how “Whisky Boy” is progressing. The foal has really grown and is starting to change colour. When born he was a wonderful deep auburn colour, just like an inviting rich dram, but is now starting to turn grey and looks like the other two male Whisky Boys “grey”, just as long as he dosen’t get grumpy too. Apparently his father was a grey horse, so he must be following in his hoofs.

There was a bit of drama while we were in the Emerald Isle, as one morning Philip was awakened by Connie (Whisky Boys’ mother) creating quite a di 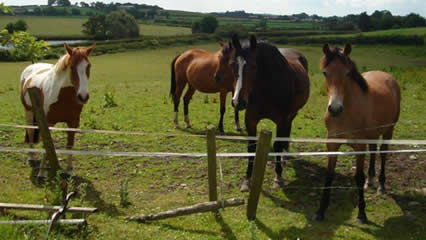 n, and instinctly knew something was wrong with horses. Poor wee Whisky Boy had got his front leg tangled in the wire fencing and it was imbedded quite deeply. The foal was cut free and a call was made to the vet to remove the deeper wire.

Thankfully the vet managed to remove the wire without too much discomfort and advised that the foal should be kept in the field to try and avoid too much inflammation. We all hope that he will make a speedy recovery, but the leg will need to be watched for a while to come. 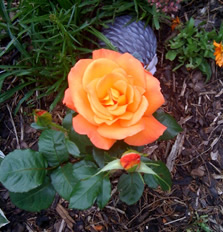 Whisky Mac Rose
Thought you might like an update on my “Whisky Mac Rose” – now what do you think of the pictures? Doesn’t it look fabulous? When we planted it last year I did suspect that it might just fizzle out and die, but even after our exceptionally harsh winter mother nature has once again provided and this elegant flower is in bloom. It just cheers me up to look at flowers in full bloom, not to mention that aroma that they share with us.