While Jim was visiting IKEA in Edinburgh, he decided to pop into Sainsbury’s which was only a short drive away, as this supermarket is one of the Whisky Boys favourite’s.  Jim was hoping for some bargains in the Whisky department, he did not go away empty handed.

Some of the bargains Jim did see included Monkey Shoulder down to only £19.18 and the biggest saving was on a bottle of Glenmorangie at a snip for £20.00.

But on this occasion Jim decided to go for two bottles, both of them Sainsbury’s own label:- 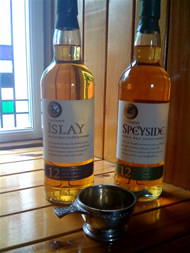 These two bottles had a 20% discount and Jim had only to pay £15.19 for each one. Which for a 12 year old single malt seems like a steal.

Jim also had in mind that we will shortly do a double tasting on these two drams, Jim and Dougie looking forward to the tasting of the Islay and Nicola who loves a Speyside will no doubt give her views on the other.

So get yourself down to Sainsbury’s and take advantage of these deals and remember to tell them the Whisky Boys sent you.