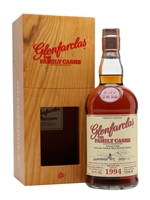 This whisky was distilled in the same year that the Spice Girls band was formed, The Lion King was in cinemas and an Edvard Munch 'Scream' painting was stolen from the National Gallery in Oslo. It would make a wonderful gift for anyone who was married in 1994 – what better way to celebrate than to share a sherry-aged Speyside dram together?