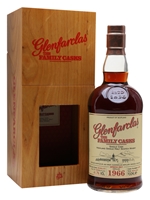 Forever remembered as the year in which England won the football World Cup, 1966 also saw the birth of this whisky, which was then aged in a single sherry butt until January 2017. A fabulous gift for anyone born in that year.