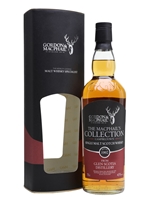 A single malt from Campbeltown distillery Glen Scotia, this is from the 1992 vintage and has been bottled by G&M as part of the MacPhail's Collection after more than two decades of ageing. The distillery is known for its fresh, fruity and grassy whiskies.