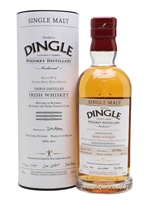 The second batch of Dingle's triple distilled whiskey, released following unprecedented demand for its inaugural bottles. This is a marriage of spirit matured in bourbon, olorosso and Pedro Ximenez casks, giving the resulting dram a warming richness and complex layers of fresh and dried fruits.

The Dingle distillery was founded in 2012 and is named after the small port town it is based in, located in the west of Ireland on the Wild Atlantic Way.