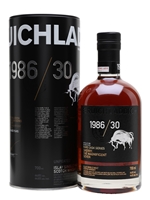 This sublime edition of Bruichladdich 30 Year Old is called the 'Magnificent Seven' because it has been created from the very last seven casks of the distillery's 1986 whisky. From the start this single malt was aged in oloroso sherry casks, then in 2012 it was transferred to Pedro Ximenez butts from Bodega Fernando de Castilla. The resulting whisky is a supercharged sherry bomb that has abundant notes of dried fruit, Christmas cake and tobacco. This is a fabulous chance to sample the last of a historic vintage, which has contributed to notable Bruichladdich bottlings such as Darker Still.