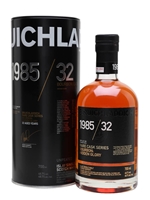 The very last 22 casks from 1985 have been used to create this fantastic edition of Bruichladdich's single malt. The casks were rediscovered in 2012 by then master distiller Jim McEwan, who filled their spirit into fresh bourbon barrels for added depth and complexity. In 2017 the whisky was again rehomed, this time into French oak which had previously held claret from a prestigious chateau. This three month period imbued the bourbon-aged whisky with an extra layer of fruit and sweet notes, as well as a subtle blush colour.