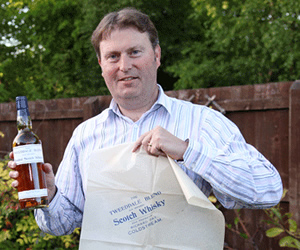 Two drams in front of me and only one brand – The Tweeddale Blend. 1st batch 10YO and 2nd batch 12YO, would there be a  significant difference, would the age statement sway me into deciding what dram I would enjoy / prefer more?

Last week I was luckly enough to attend a Tweeddale whisky tasting hosted by Alastair Day at the SMWS in Edinburgh Queen Street. Without too much prior information I was certain we were tasting Tweeddale however I was unaware we would be tasting 1st and 2nd releases side by side – I love a comparison. The tasting would also involve some society bottlings which were selected as being similar to those single casks used in the creation of The Tweeddale Blend.

The Tweeddale is a blend of only 9 single whisky casks in various quantities, so volume in a release / batch is always low – 8 single malt whisky casks and 1 grain whisky cask.  Alastair also let it be known that he has included casks from all over Scotland’s Whisky producing regions, Islay, Highlands, Speyside and the Lowlands.

The similarity between the 1st release and the 2nd release is many of the casks used in release 1 have been reused in release 2, (only matured for an extra 2 years) but one significant difference in the 2nd release is that Alastair has also opted to use a much older single cask grain whisky (15YO). He would not tell me the distilleries in which ANY of the casks originated.

So what are the differences:

The Tweeddale Blend 10YO

The finish was long and lingering with the smoke hitting a top note.

The Tweeddale Blend 12YO

The finish was very warm and peppery hot.

For my palate I much preferred the 10YO, primarly because the flavours felt more in tune and the smoke was at a great level when balanaced with all the other notes.  The 12YO was a little lively for me, spicy and fiery – it had a full on hit.

Alistair was in agreement that there was much less smoke in the 12YO which he will be trying to reinclude when blending release 3.

Thanks for a great afternoon and I’ll be watching out for The Tweeddale Blend 3rd Release.