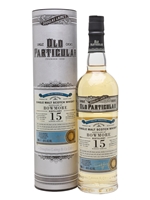 A single-cask Islay single malt from Bowmore, bottled by Douglas Laing for the Old Particular series. A rich, sweet whisky with notes of burned buns and cinnamon alongside gentle peat smoke flavours.