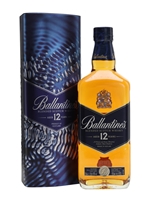 A limited-edition bottle of Ballantine's 12 Year Old featuring art created by vocalist Reeps One. To create the piece, Reeps One played a track through an audiovisualiser filled with Ballantine's whisky. The result is the beautiful and unique sonic pattern that you see here. This bottle is part of Ballantine's True Music series, which enables artists to visualise music and transform whisky into works of art.