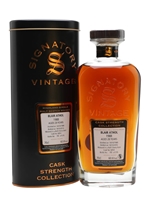 A 1988 vintage Blair Athol from independent bottler Signatory as part of the Cask Strength Collection. Distilled on 14 October, it was matured in a single refill-sherry butt for 28 years before 576 bottles were yielded on 18 October 2016. It's a rich and obviously sherried dram, with balanced fruit and spice.