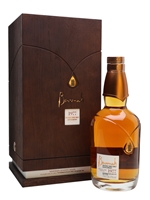 An exquisitely-packaged bottle of Benromach 1977, filled from a single hogshead that had lain untouched for 39 years. Only 225 bottles were created, each one packaged in a dark oak box reminiscent of the wooden washbacks used by the distillery before it closed in 1983. Also accompanying the bottle is a hardback book, which guides you through the history of the distillery – and some of its most notable characters.

The whisky itself is smooth and sweet, with vibrant notes of ripe banana and passion fruit underscored with citrus, dried tobacco and toasted oak.