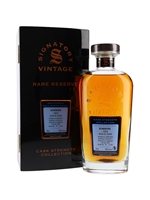 Sherried single malt from Bowmore's golden period, when it was producing the tropical-fruit-led whiskies that won it a loyal fanbase. This edition has been bottled by Signatory from a single cask, which yielded 183 bottles.