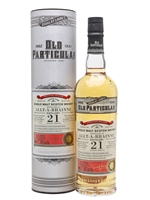 Filled from a single refill hogshead, these 287 bottles are part of Douglas Laing's acclaimed Old Particular series. The single malt within, distilled just 20 years after the distillery was founded, has notes of vanilla, buttered toast, marmalade and sultanas.

A great chance to sample this distillery's whisky, which is most commonly used in blends.