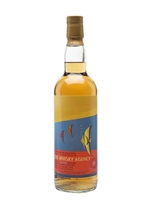 A typically colourfully labelled bottling from German independent bottler The Whisky Agency. Distille dat Ben Nevis in 1996 and aged in a refill sherry butt for 19 years, which yielded 360 bottles in 2016.