Nicola is currently compiling a family tree and she came across this. 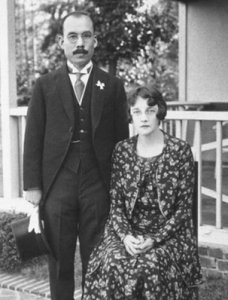 But first here is a little bit of context: The father of Japanese Whisky, Masataka Taketsuru, married a girl from Kirkintilloch, Glasgow, Jessie Roberta (Rita) Cowan.  The marriage took place at the Registry Office at Great Hamilton Street in Glasgow on the 8th of January 1920.

Masataka Taketsuru was born in 1894 in Takehara, Hiroshima where his family, since 1733 has owned their own saki brewery.  In December 1918 he arrived on our Scottish shores and studied organic chemistry in the University of Glasgow.

His Whisky apprenticeship started in Longmorn distillery in Speyside.

We move on to January 1920 when he married Jessie Cowan from Kirkintilloch. A couple of months after their marriage they moved for a short time to Campbeltown where Masataka continued his Whisky apprenticeship at the Hazelburn Distillery, it is about this time he returned to Japan together with Jessie. 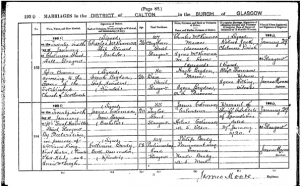 The coincidence is that three weeks after he was married to Rita (29/01/1920), at the same Registry Office my grandfather, James Coleman (20), Nicola’s great grandfather, married Catherine Brady (18).

Another coincidence is that both these weddings were irregular weddings. Up until 1940 most couples in Scotland were married by a minister/priest and this involved banns being read out on three consecutive Sundays in the church/chapel, these were regular weddings. A few were wed by Irregular marriages, where a bride and groom made a declaration in front of two witnesses, this would allow them to obtain a warrant from a sheriff or sheriff substitute and have the marriage registered by the local registrar.

One of the main reasons that irregular weddings took place is that either the bride or the grooms family were against the marriage.

A couple of years after his return to Japan he worked at Kotobukiya (Suntory) where he played a large part in the building of a distillery.

It is now 1934 he founded Dai Nippon Kaju K.K. in Yoichi his own distilling company. Yoichi is located on the northern Japanese island of Hokkaido and Masataka could see that the landscape was very similar to Scotland. Nikka now became the new companies name.

Nikka now a very famous name in the Whisky world was first sold in October 1940 and has stayed as one of Japans finest drams ever since.

Taketsuru’s wife Jessie died in January 1961 and Taketsuru died in 1979 and they are buried together in Yoichi.

I have to admit that I am quite chuffed that my grandparents were married in the same registry office in the same month and year as a very important man in the world of Whisky.

I would now, like to visit Japan and see the fruits of Masataka’s labours in the evolution of Japanese Whisky.