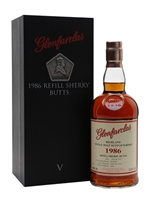 This is the fifth release in Glenfarclas' Family Collector series. Distilled in 1986 and aged refill-sherry butts for around 30 years, this is a lighter style of sherried Glenfarclas.