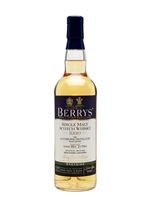 A 1990 vintage whisky from Auchroisk, bottled by veteran spirits experts Berry Brother's and Rudd. This was bottled in 2014 and is mouthwatering with notes of apples and pears.