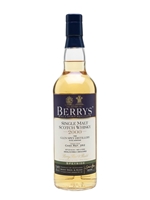 A 2000 vintage Glen Spey from Berry Brothers & Rudd, the oldest family owned independent wine and spirits merchant in the world. This one has matured for about 14 years before being bottled at 46% and is buttery and honeyed.