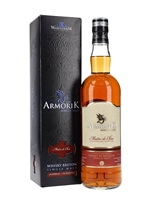 A 2010 vintage Armorik whisky, made at Distillerie Warenghem in Brittany and matured in a pair of ex-oloroso sherry barrels for seven years, before being bottled as part of the Maitre de Chai series.