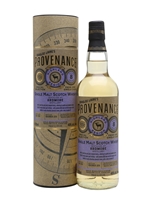 An eight-year-old Ardmore from Douglas Laing's Provenance range. One of the few distilleries in the Highlands that produces peated whisky, this was distilled in July 2008 and bottled in November 2016. Sweet and mouthcoating with notes of smoke, smoked meat and sugar syrup.